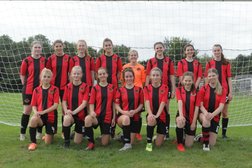 Girls teams at every age group from Under 8 - Under 18

Winchester City Flyers started back in 1996, with only one 6-a-side team playing under the Flyers banner. This generation of Flyers players, donned in a fetching yellow and green kit, were the start of a club that is now the biggest girls and ladies club in Hampshire. This team was run by our co-founder and Club President Adee Chant, who's passion for girls football has not only been the driver behind our clubs growth, but also the wider growth of the female game in Winchester and Hampshire.

From this starting point of 1 team, the club grew steadily, with many girls joining from local schools as they relished the opportunity to play without the boys! After the first 10 years of the clubs existence, Flyers were proud to boast teams at Under 10, 12, 14 and 16 in the Winchester and District league, along with an ever-growing family of coaches and volunteers. As the female game continued to grow, both Flyers and the league shifted to having teams at every age group, from Under 10 to Under 16, rather than at every 2 years. Our philosophy of believing that every girl should have the opportunity to play football, no matter their ability or experience, was central in the clubs growth over these years.

From then on the club has seen nothing but expansion, with there being teams at every age group in the Winchester and District league by 2016. As more and more girls came to join us, we bought more volunteers into the Flyers family to help run the teams and move them through the age groups. This success in numbers during this period of the clubs history, also allowed our Youth teams to move into Ladies for the first time. This was in addition to some age groups also running Sunday sides in the North East Hampshire league for a number of years, as girls were keen to play across the whole weekend!

However, not even the most optimistic of Flyers family members could have foreseen the unbelievable growth of the Youth section of our club over the last 3 seasons. We now have a staggering 21, yes 21, Youth teams, with at least one team at every age group from Under 8 to Under 18. With some age groups having up to 3 teams, the club needed to name all the teams beyond their age, so as we are the Flyers, they naturally have bird names! To give you an idea of who these teams are, check out our list below:

Our fully inclusive club welcomes any new Youth players who wish to join us and as you can see there is a wealth of opportunity for players to do so. We will never turn a girl away from playing, as if we have too many, we simply create a new team and grab a willing coach to come in and run it! We also strive to give players the best opportunity to develop and improve, as we want to compete with all teams in the Hampshire Girls Youth Football Leagues.

If you would like to join one of our fabulous youth teams, then please email us at: winchesterflyers@gmail.com with the player's name, age and school year.